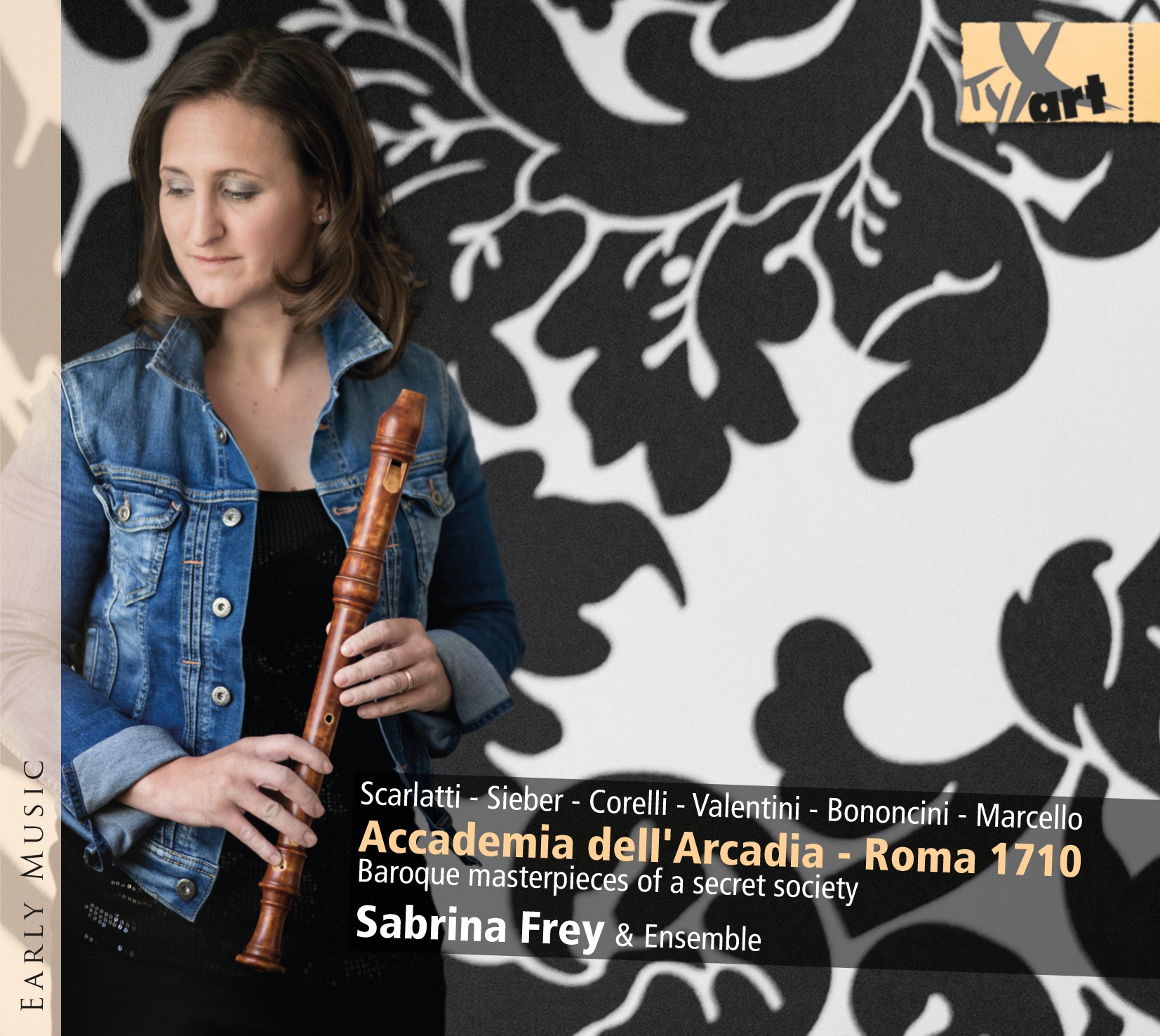 The composers and literati of the Accademia dell’Arcadia established in Rome in 1690 worked in secret — the pope had prohibited secular baroque music by decree. On this CD, recorder player Sabrina Frey — together with top-ranking artists — presents a few musical jewels of the secret society. The manuscripts are scattered throughout all of Europe today.
The story of the Accademia dell’Arcadia begins in Rome in 1690. A group of literati, who were already members of the “Accademia Reale” founded by Queen Christina of Sweden a short time before, joins together. The goal is not only to appear as the most important academy in Italy, but to unite the culturally diverse regions of Italy and to give artists of different regions the opportunity to have discussions and contribute their ideas – a truly revolutionary idea back then, a little under 150 years before the political union of the Apennine peninsula. Academic “colonies” are quickly established in other cities. Especially in aristocratic circles, it is considered a privilege and special recognition to be able to become a member. In 1925, the organization changes its name to “Accademia letteraria italiana” and is still in existence to this day as one of the oldest and most representative academies in Italy.
“The compilation of the works as well as the instrumentation of the basso continuo in the sonatas and concertos took more and more shape over the course of the investigations. In order to give the wide variety of works the sound and the expression I imagined, I had to use full instrumentation for the continuo, as was customary in Italy during the baroque. All the registers with harpsichord, violoncello, theorbo alternating with baroque guitar, violone and organ are used in different ways. Although Bononcini has written “Divertimenti Flauto solo & Basso Continuo,” I decided on an arrangement of the concerto for violoncello and originally violin in concert settings — not least with regard to Bononcini as a cellist. I also perform Corelli’s famous Opus 3 on a voice ﬂute and use complex instrumentation of the basso continuo in order to express my understanding of the work. As has been mentioned by various theorists in treatise and is being practiced by contemporary musicians, the instruments intended by the composer for the upper parts can be replaced with other instruments even during the baroque period.
Overall, This is a CD which selected baroque compositions of the Roman Accademia dell’Arcadia for recorder can be heard in an inspiring way. It is to captivate the listener for this exciting era and its wide variety of sounds. A matter of the heart!” (Sabrina Frey)

"With her captivating music, Sabrina Frey conveys through her recorders the emotional wealth of this music, its radiant colors, the language of love, pain and longing, enticing the feet to dance, warming the heart, and creating a pastoral idyll for the souls of the listeners." (Newspaper Südkurier)

»Baroque music in all its splendour: Sabrina Frey and her ensemble show total involvement in the music which is played stylishly and with refreshing lightness.«
pizzicato.lu, Guy Engels (online, 10 July 2015)

»A delightfull combination of well chosen program materials and expert recording techniques.
Sabrina Frey and her companion musicians are top notch performers that serve a concert with well worked ensemble and group interplay. [...]
A highly recommended recording that brings interesting music to light in a manner not often done with such great style.«
classicalmusicsentinel.com Canada, Mark Kravchenko (11/2015)

This CD has been nominated for the German Record Critics’ Award, Category "Early Music" (List No. 3/2015)