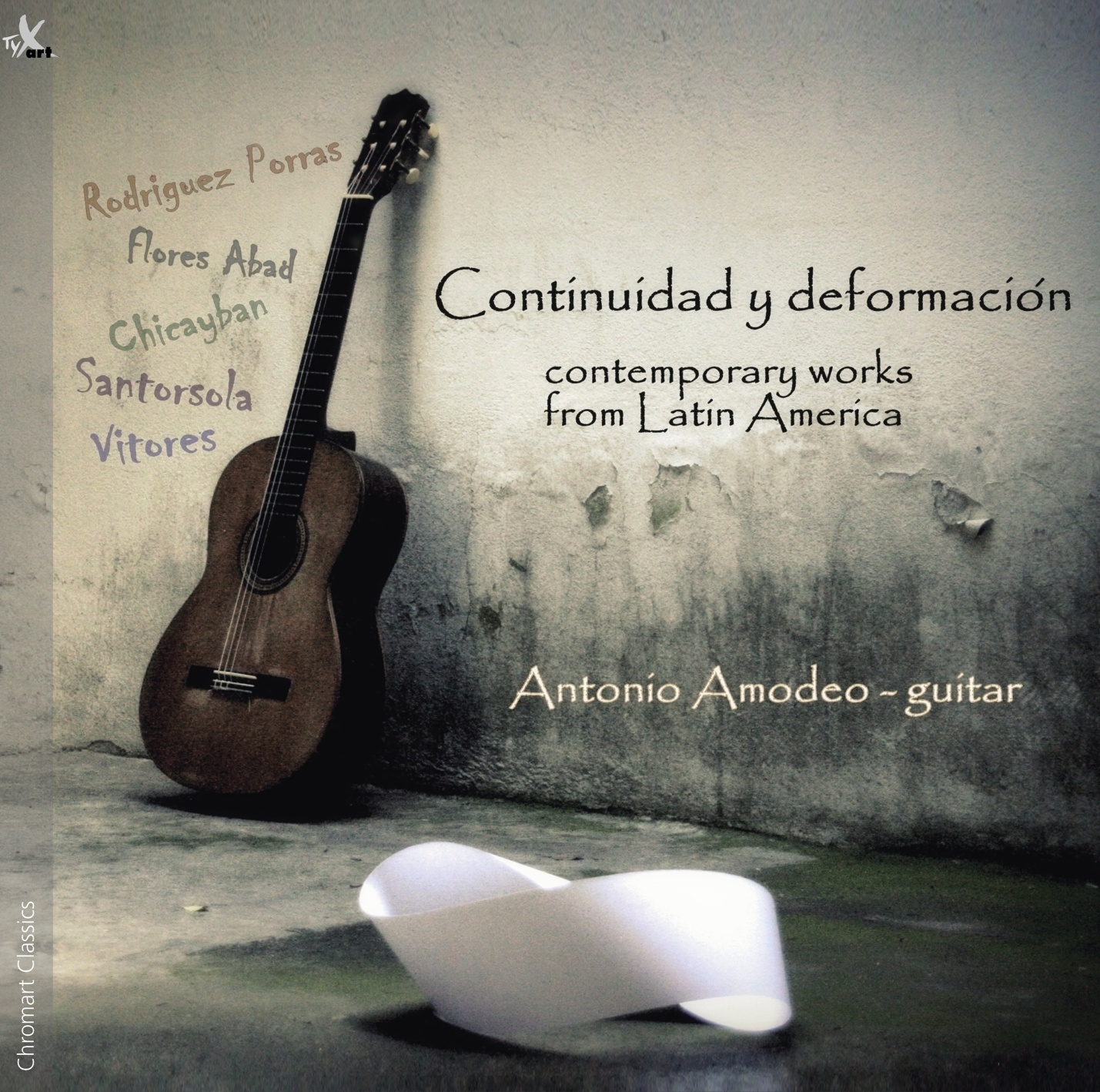 In this album we can find various realities transformed in sound and different kinds of writing belonging to the same area, the so-called Sur, kaleidoscopic and impossible to restrict to a single form of poetics. The works performed here are the musical representation of the fusion between the academic style and the richness of the popular element typical of that area.
Flores Abad dedicated the piece "Continuidad y deformación" (2012), which gives the title to Antonio Amodeo and to the guitar. Eduardo Flores Abad (Guayaquil, Ecuador 1961) is a composer artist whose poetics are inspired by the unorientable Möbius strip, whose image is on the CD cover: "The work refers to the topology of the surface of the unorientable Möbius strip. The music is like interwined apparition of two musical currents that return endlessly to the same temporal plain."

Antonio Amodeo – Born in Piacenza (Italy) in 1980. He Graduated with honors, at the “Conservatorio G. Nicolini” in Piacenza, with the Master Marco Taio. He perfected at the Hochschule fur Musick Mainz (Germany) with the master Stefan Hladek, and attended various training courses and master classes with internationally renowned masters including Carlos Bonell, Leo Brouwer, Tilman Hoppstock, Oscar Ghiglia. As soloist he got several awards including scholarships of merit, and premiered in Europe and Worldwide works of latino-american composers such as Guido Santorsola, Mario Gomez Vignes Eduardo Flores Abad , Josè Vitores, Alberto Chicayban, Rodriguez Porras, Thiago Colombo.
He collaborated and took part in many different chamber music ensambles such as Orchestra a plettro “Luigi Cremona”, l’Orchestra da Camera “A. Zanella”, Diversus Guitar Ensamble, Quartetto Chitarristico Exacorde. With the “Ipanema Duo” (flute-guitar) he recorded a CD, published by the label “Sheva Collection”, including original arrangements and premiere recordings, while with the folk singer Erica Opizzi, he recorded the CD “Wildwoodflower” (Open Reel Records). He also published “tre canzone napoletane” (Accademia Perosi Edizioni) transcribed for solo guitar.
Graduated in Science of Education from Catholic University of Piacenza in 2004 and in Music Education from I.S.S.M. “Vecchi-Tonelli” of Modena, hae gave masterclasses for young guitarists by the summercamp “Voltaggio Classica” and he had been teaching in many music schools and academies, both in Northern Italy and in Germany. After having won the first national competition for teaching guitar at public college, he’s now guitar teacher at the school G. Griffini in Casalpusterlengo. From 2015 he is creator and artistic director of the Festival “Chitarre a Piacenza”.